Late last year Barnes & Noble opened a new “superstore” in Eastchester, New York. The store features a full-service restaurant which serves alcohol. And, the store will be 20-25% smaller than its traditional superstores.

Normally, this news would be taken with a yawn (there are other such B&N superstores). But the sad fact is that B&N is responding to Amazon.com by adding a restaurant and cutting the number of books that it will carry. As it is B&N stores in Colorado Springs (where our offices are located) already devote a lot of space to other items besides books. The two stores in Colorado Springs have a Starbucks (a smart idea, in my opinion and it doesn’t take up all that much space), a large display for their Nook device, games, toys and other non-book related items. Since the price of these non-book related items are just as or more expensive than at nearby competitors such as Best Buy, Target, Walmart and Toys R Us it makes little sense to squeeze out books for them.

The B&N’s here used to sell CDs and DVDs but at a premium price which made no sense since there were competitors selling the same items at a greater discount. It seems that the B&N philosophy is to add these products and now large restaurants to their stores rather than come up with innovative approaches to selling books. To me this doesn’t seem the ideal approach to competing with Amazon.com.

If you have thoughts to share on this send them to gauntlet66@aol.com.

Numbered and slipcased copies of The Stars in My Eyes have shipped. We are still waiting for traycases for the lettered edition. We have a limited number of copies still available. We, in conjunction with David Morrell, decided we can’t wait any longer for Doug Winter to provide his piece. Instead Tom Monteleone will be writing an afterword. This means new tipsheets for the lettered edition have to be sent to Morrell and both he and Monteleone will sign them.

We have shipped all numbered and slipcased copies of David Morrell’s Rambo III (slipcases arrived this past week). We await the traycases to arrive, which should be within the next few weeks.
Click here to order RAMBO III

HONKY TONK SAMURAI by Joe R. Lansdale
The first draft of HONKY TONK SAMURAI has been completed and is being proofread. We will only be printing enough copies to satisfy orders (plus another dozen or so for late-comers) so if you’ve been putting off ordering this Hap and Leonard title you might want to order now.

We will be receiving a small number of copies of Cemetery Dance’s Stephen King/Richard Chizmar novella Gwendy’s Button Box, signed by Chizmar. We are selling these at cost ($25), and only four of the ten copies remain. Since we may not be able to service all customers please order with a credit card (Sorry, no PayPal accepted for this offer). The book is bound to sell out and become a unique collectible.

From our friends at Borderlands Press they are offering BORDERLANDS 6: AN ANTHOLOGY OF IMAGINATIVE FICTION, a signed limited edition which is almost sold out.

“An Instant Classic! The sixth volume of the most influential anthology series of the last 25 years is now available in a stunning limited edition hardcover— signed by the editors and all 24 contributors. Multiple award-winning writers Michael Bailey, Gary Braunbeck, Jack Ketchum, David Morrell, Steve Rasnic Tem, Paul Tremblay, and many others have written stories which push the boundaries of the genres of horror, dark, fantasy, and the weird tale.

“If you are a fan of stories which stretch the parameters of the box, sometimes refusing to crawl inside and obey the tired rules of tired tropes, you already know about the Borderland series . . . The sixth volume is no different . . . Highly recommended for all fans of short fiction, fiction that will toss the reader from his or her comfort zone and transport them to a very special place.” —Horror World

We have 5 copies of the hardcover of Ray Bradbury’s Moby Dick: The Screenplay. This was an unsigned hardcover but Ray was kind enough to sign our copies.

We originally sold these for $250 and had them on sale for $200. For just our newsletter customers we’re lowering the price to $150.

Sorry, no Paypal accepted for this offer. 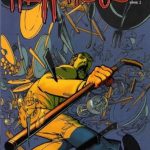