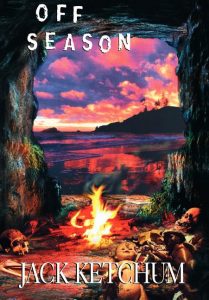 Jack Ketchum (aka Dallas Mayr) was a good friend of mine as well as an exceptional author. Often we would share a desk together at the Chiller Convention in the Meadowlands (New Jersey). I’d pick him up from his NYC apartment, we’d stop by the Carnegie Deli (I’d double park and he’d go inside) for a sandwich that would last two meals and then it was off to the convention. Every fifteen or twenty minutes he would take a cigarette break and I’d be left to man the desk alone. It was at those times that our stalker, whom we named Mr. Spit, would drop by, spend fifteen minutes asking questions and leave (just before Dallas returned) without having purchased a single book. Sadly, Dallas is no longer with us, but I think of him often.

I was looking through our back stock the other day and uncovered 5 copies of the Overlook Connection (2004) tradepaperback of his classic OFF SEASON. Having been friends, Dallas signed these copies for Gauntlet.

We are making them available this week for $50 (on a first-ordered, first-served basis).