Gauntlet presents the acclaimed and award-winning novel LEGEND by Marie Lu, the first book in a trilogy (all three published by Gauntlet as limited editions).

Legend, the first book in the trilogy, is set in a dark, futuristic Los Angeles. It tells the story of two young people from opposite sides of the tracks: Day, a fifteen-year-old boy from the slums who has become America’s most wanted criminal, and June, a fifteen-year-old from a wealthy family who is America’s most gifted soldier-in-training. The two’s paths seem like they should never cross, but when June’s older brother is murdered in the line of duty and Day is the main suspect, June sets out to hunt Day down and bring him to justice. But seeking out her brother’s killer brings unexpected revelations about her world, society, and family. In this new America, what is truth and what is a lie?

Our limited edition has loads of bonus material not found in the mass market version. Besides being a wonderful novelist Marie is an accomplished artist. Marie Lu created several character sketches of June and Day, which are included. These sketches are exclusive to the limited edition.

This limited edition also contains two outtakes, character profiles of June and Day, and an alternate ending. One of the outtakes and the alternate ending appear in all editions of the book. The longest deleted section appears only in the lettered edition. Marie also provides an introduction to the novel (again, exclusive to the limited edition). 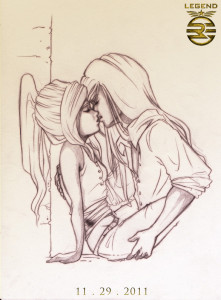 One of the included sketchesThe lettered edition of LEGEND contains additional material that not found in the numbered version. Besides one of the outtakes from LEGEND there are several sections dealing with Marie’s inspiration for Day. She says: “I wrote a fantasy novel called The Glass Sonata. This fantasy story was where I first created Day as a character. I also drew quite a lot of inspiration for Legend from my old manuscript. So I’ve included excerpts from that old manuscript, which depict Day the way he was back when I first created him.”

LEGEND is signed by Marie Lu and The New York Times Best Seller author Ridley Pearson, who wrote an Afterword for the book.

Among the numerous honors LEGEND has received are:

“(With) the Gauntlet Press collector’s editions, you will receive a wealth of bonus materials including the authorâ€™s own anime-style drawings of Day and June, profiles of the characters, outtakes from the novel, original novel materials the author wrote when she was a teenager herself, plus a lovely Afterword by bestselling novelist Ridley Pearson… It is a beauty.” – Tomb of Dark Delights

“(The Gauntlet Press edition of ) this book shows me that some people are just born gifted writers, and Marie Lu is definitely one of them. If you love Legend as much as I do, then you should definitely check out this book! It was completely awesome and wonderful and it offered so much new insight on the Legend series that makes reading it so much more enjoyable!” – Book Thoughts By Marielle

“Lu’s debut is a stunner. Weaving the strands of SF dystopia, police procedural, and coming-of-age with touches of superhero and wild frontier traditions she fashions a narrative in which the action is kinetic and the emotional development is beautifully paced. First in a series, this story is utterly satisfying in its own right and raises hopes high for the sequels to come.” — Publishers Weekly, Starred Review

“I could only stand up and cheer for Marie Lu’s LEGEND. A fine example of commercial fiction with razor-sharp plotting, depth of character and emotional arc, LEGEND doesn’t merely survive the hype, it deserves it.” — Ridley Pearson, The New York Times Book Review.

“A stunning product from Gauntlet as always, and a fine story that will send readers looking for the others in the trilogy.” — Horror World

Richard Matheson’s I Am Legend Screenplay (Censored and Unpublished)