Gauntlet publisher Barry Hoffman worked for 2 ½ years to secure all the rights and permissions to publish Richard Matheson’s three KOLCHAK SCREENPLAYS. This is the first release of The Night Stalker and The Night Strangler (two “Movies of the Week” in 1972 and 1973, respectively, which led to the Kolchak series 1974-1975), plus The Night Killers (an unproduced script whose rights are still retained by Dan Curtis, and may one day become a feature film).

Acclaimed Kolchak chronicler Mark Dawidziak edits the book, which includes interviews with Matheson, William F. Nolan (who co-wrote The Night Killers), Dan Curtis and Jeff Rice (creator of the Kolchak character). Our agreement with ABC-TV allows us to publish just a signed limited edition of 552 copies (numbered and lettered). As a collectible, these scripts rival the limited edition ofÂ RICHARD MATHESON’S THE TWILIGHT ZONE SCRIPTS.

The book includes photos from private archives (relating to “The Night Stalker” and “The Night Strangler”) that have never before seen the light of day. And, we were able to obtain artwork by noted illustrator E. Silas Smith (he was commissioned to draw for “The Night Stalker” and “The Night Strangler”). These pieces have also never been published before.  Some of these illustrations appear in the Numbered edition, a few only in the Lettered edition, and a few more in a chapbook of illustrations/photos that will be free to anyone ordering the book from Gauntlet. 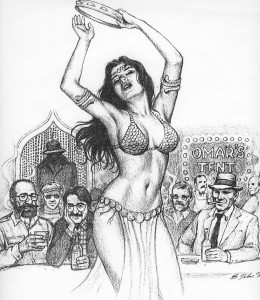 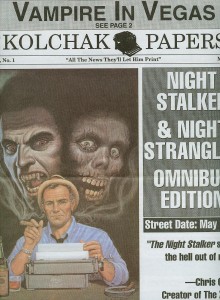 This is a newspaper that was going to be used to advertise an Ominbus edition of Jeff Rice’s novel “The Night Strangler” and “The Night Stalker.” The book was never published. This illustration will be reproduced in The Kolchak Scripts in black and white. 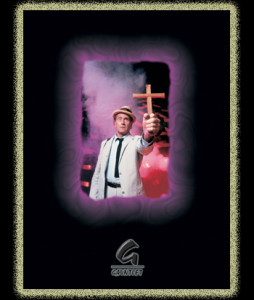 The back cover of RICHARD MATHESON’S KOLCHAK SCRIPTS

Introduction to The Night Stalker (by Mark Dawidziak)

Cast and credits for The Night Stalker

The Night Stalker (by Richard Matheson)

Introduction to The Night Strangler (by Mark Dawidziak)

Cast and credits for The Night Strangler

The Night Strangler (by Richard Matheson)

Introduction to The Night Killers (by Mark Dawidziak)

The Night Killers (by Richard Matheson and William F.
Nolan)

Appendix A: The Rest of the Kolchak Story

Appendix B: Richard Matheson and the TV Movie

“The Kolchak Scripts is a superb compendium of information. Great care and thought was used putting this project together. Dawidziak does a wonderful job.” — Horror-Web.com

“(The Night Killers script) is the cherry on the sundae. To book-end these wonderful scripts are Mark Dawidziak’s short history of Kolchak, giving the teleplays a sense of place within television history.” — The Ghostbreakers

“If you’re a Kolchak fan, rejoice with this compilation! If you’ve never heard of Carl Kolchak, please let me know what planet you hail from and find out what you’ve been missing.” — Creature Feature

“Ultimately, this book is a fascinating look at a fascinating character, and well worth your attention I was literally enthralled until I had read the book cover-to-cover.” — thoughtslop.org

“This beautiful coffee table (book) is destined to become a red-hot collector’s item and a must for Kolchak and Matheson fans.” — The Zone

“Without a doubt, Kolchak’s character and The Night Stalker have became a certifiable cult phenomena, and Gauntlet Press in Richard Matheson’s Kolchak Scripts gives the character and successive scripts the respect and special attention they deserve.” — William Simmons, Underworlds Magazine

“This is a collector’s prize surely for the words if for nothing else… For its value to Matheson fans, Kolchak fans, horror fans and fans of television history, this hefty volume will be worth its weight in fine metals.” — Cemetery Dance Magazine

The Beardless Warriors and Brothers in ArmsBooks, Richard Matheson