Imagine Katie Beers – the 10-year old kidnapped and imprisoned in a crude cell by a family friend for sixteen days in 1993 – at the age 23: Is she a well-adjusted adult because of love lavished upon her by caring foster parents? A frumpy housewife who abuses her own children? Or possibly something far more heinous?

Such is the premise of Hungry Eyes – the story of a street-wise youngster, in the mold of Katie Beers, victimized by a negligent mother, and abducted by a family friend. The child feigns suicide to escape eyes that continue to haunt her, and disappears.

Thirteen years later the Vigilante is stalking rapists and child molestors who have slipped through the judicial system with a slap on the wrist.

Deidre Caffrey, who as a young reporter gained the kidnapped child’s confidence, is the only one who knows the Vigilante‘s identity. She determines to find the young woman to understand what triggered her rampage after 13 years of anonymity.

Hungry Eyes explores the dark side of victimization and its aftermath. In ten or twenty years will women, abused as youngsters and deprived of their childhood, take feminism to its extreme and emulate their male serial killer counterparts?

Hungry Eyes examines the relationship of two complex women whose lives are inextricably linked. There is no attempt to create the next Hannibal Lechter. This serial killer has many layers, and the reader is torn between empathizing with what drives her while condemning what she has become.

“â€¦a powerful piece of work. Hoffman brings you just about as close to a
serial killer as you’d ever dare to be.” — Robert Bloch

“Hungry Eyes is a fast-reading, complex, fascinating debut. Barry Hoffman’s characters come to life on the page and resonate long after the intricate story is done.” — Poppy Z. Brite 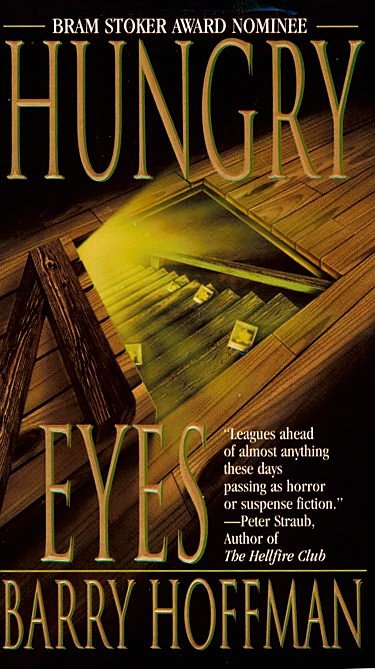 IS HUNGRY EYES ILLEGAL IN OHIO?

Do Barry Hoffman’s novels Hungry Eyes and Judas Eyes contain child pornography? In Ohio the answer could well be yes. If I traveled to Ohio and read from or handed out copies of either of these books, I could face arrest and incarceration. Worse still, anyone possessing the books in Ohio could be arrested and prosecuted.

This possibility was brought to my attention by the recent prosecution of Ohio resident Brian Dalton, which brought to light a 1989 Ohio law which bans the possession of obscene material involving children. Material includes the written word, not just images.

The parallel between Brian Dalton’s 14-page journal and the plot of Hungry Eyes (which is reiterated in Judas Eyes) is startling. In Dalton’s journal, three children are tortured and molested in a cage in a basement. In Hungry Eyes, Renee Barrows is tortured and molested in a cage in a basement (see page 191 of Hungry Eyes and page 331 of Judas Eyes). Dalton’s journal is far more explicit (so disturbing, according to an AP story, that grand jurors asked a detective to stop reading after about two pages). That, however, is beside the point. So is the fact that Dalton was a convicted pedophile on probation. The prosecution agreed the journal was fictitious. The prosecution agreed Dalton did not attempt to disseminate the journal. He was prosecuted simply for his thoughts and accepted a plea bargain. Dalton cannot appeal the case because he agreed to a plea bargain, which cannot be appealed (yes, he had lousy legal counsel).

Most First Amendment scholars feel the Ohio law is clearly unconstitutional, but it remains on the books until someone who is found guilty of violating the law appeals the verdict. I could be arrested for possession of my books if I were in Ohio. If you live in Ohio and possess Hungry Eyes or Judas Eyes you could be prosecuted. Bookstores stocking my books are in violation of the Ohio statute.

And I don’t pretend to be the only author in violation of this law. Stephen King’s IT has a pivotal scene involving consensual group sex among children. Live in Ohio and own a copy of IT, and you’re in violation of the law. Let a friend borrow it, you are also guilty of disseminating child pornography . . . in Ohio.

The knee-jerk reaction is Dalton is a convicted pedophile and may well have someday acted on the writings in his journal. I won’t argue the fallacy of that argument here. When it comes to pedophiles, objectivity and common sense go out the window. Let the sucker rot in prison, most would say. “Consider the law, though, not the offender. I, as a writer, am at risk as is anyone who purchases Hungry Eyes or Judas Eyes.”