View cart “Richard Matheson: Collected Stories Volume One” has been added to your cart.
Sale!

Released in 1953, It Came From Outer Space was one of the first 3-D films made. Rumors about Bradbury’s participation with the film have run rampant for years. Bradbury did not write the final screenplay — good news, actually, as Bradbury retained their rights — but he wrote four treatments and gets story credit. These screen treatments have never been published before.

Donn Albright, who edited our edition of DARK CARNIVAL in 2001, edited IT CAME FROM OUTER SPACE. He has done a fantastic job in pulling together the original Bradbury typed pages of the outlines and treatments, gathering more bonus material than we could have ever imagined possible, and convincing Bradbury to allow us to use never before published short stories in this book.

The Gauntlet edition of IT CAME FROM OUTER SPACE is more than just a printing of the outlines and treatments which Bradbury wrote for the film. It is an in-depth study of the evolution of the film. The book is filled with: 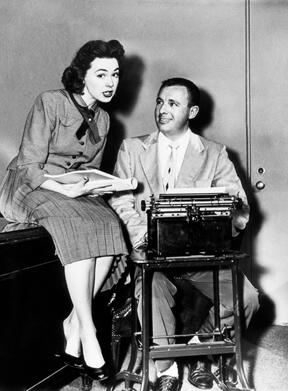 Pictured to the left is Ray Bradbury and Barbara Rush (who played “Ellen Fields”, the female lead in the film It Came From Outer Space), dated 1953.

“I’m speechless… this book is breathtaking.  It is a powerful and personal journey through the highlights of Bradbury. You can feel the emotions that Bradbury must have experienced in his emergent period, and it just empowers your soul.” — Horror-Web

“Talk about classic SF! Scholars and librarians should queue up early to try and get their hands on this noteworthy book.” — SFRevu.com

“This is more than a book… this is an event. If you are a Bradbury fan or a fan of It Came From Outer Space, you must gift yourself with this unique collection…” — The Tomb of Dark Delights

“This beautiful limited-edition coffee-table book is destined to become a red-hot collector’s item and is a must for Ray Bradbury and 1950s sci-fi film fans.” — Scifi.com

“A titanic treasure trove… The initial reaction to the book is simply one of awe. A must-have for the well-heeled Bradbury aficionado”. — Filmfax

Other Kingdoms: The Unedited Version